I arrived as my uncle was repairing his saw

In the last post Brandon Hill by the scenic route I described the journey to Clarendon. This was not just a tourist outing, but a journey to re-connect with my family, some of whom I’ve not seen since I was eight years old – many of whom I have never met.

This trip was also a response to spirit guidance (mainly my maternal grandmother whom I’ve never met) to come home, as there was a role for me in healing the generational pain in the family.

I arrived tired at my uncle’s house, but was instantly refreshed by his welcome (he didn’t know I was coming). He is the keeper of the family’s history. Imagine my amazement when he pointed to the land next to his house and said ‘that’s the burial ground’. 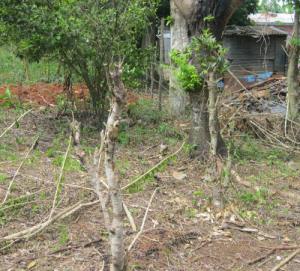 Author of novels Dare to Love and Betrayed www.pennydixon.com poetry anthology Raw www.cymbalspublishing.co.uk and blogger www.writingcreativelywithspirit.com
View all posts by predencia →
This entry was posted in Uncategorized. Bookmark the permalink.