When I saw that Lynne McTaggert was going to be speaking at the Fab Friday Tree of Life lecture last Friday I not only booked a ticket but a front seat because I didn’t want to miss a single word, didn’t want my vision impeded by any large heads or woolly hats. Lynne is the author of The Field, the basis for the movie What the Bleep Do We Know, one of the most influential movies I’ve watched, and which I loan out to others to help them understand how important our thoughts are in shaping our lives. 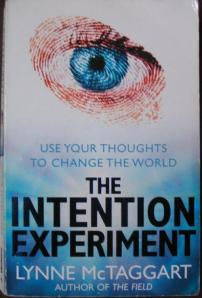 I also read her second book The Intention Experiment which shows how we can physically change things when we meditate with intention. Experiments shows that when groups meditated with intention in certain parts of America crime rates dropped, people were spontaneously healed, and peace broke out between warring factions.

I showed up early for the 6 p.m. meditation offered prior to the 7 p.m. talk and was therefore fully awakened to hear what Lynne had to say about living with intention. She was preceded by Brian Hubbard, her husband, who was promoting his book Time-Light. His take on the ‘self’ was a little too complex for me and I found myself drifting off, but after the break I was fully awake to hear Lynne.

I was prepared to be amazed by what she had to say, what she had to share about her new work that lead to the publication of her third book The Bond, but I was not prepared for the exercise in telepathy as she showed us how much like ‘leaky buckets’ we are, her term for the fact that we are sending and receiving thoughts from others all the time. We are not sealed entities with our own thoughts; we transmit and receive thoughts all the time.

She then encouraged us to test this out by taking part in our own experiment. Working with someone we didn’t know one had to be a sender and the other the receiver. With eyes closed we breathed in deeply three times together, joined hands and the sender had to focus, with all five senses on an object that means a lot to them. The receiver simply had to take note of anything that they saw, heard, felt, sensed, smelt, or tasted.

I was the receiver and straight away saw a big chocolate brown bear, which later dissolved and was replaced by Pudsey Bear from Children in Need Appeal. I kept thinking that the bear was damaged. The sender had actually been thinking of two statues, 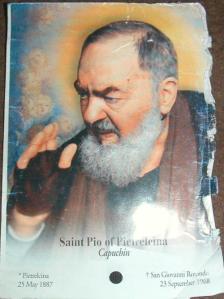 one of Saint Pio of Pietreleina in which he’s wearing a chocolate brown cloak. She showed me a picture of him with big bushy beard and eyebrows, and, as all agreed later when I gave feedback, looks like a bear of a man. The other statue was of Our Lady, had been her mother’s favourite statue, and her mother kept knocking it over and knocking its head off. They had to keep gluing it back together.

Other people got direct hits. For instance one person was thinking of holidays by the sea and the partner picked up caravans, which is where they stayed on the holidays. Still others got the object intact.

Lynne then encouraged us to form a healing circle to show that when we intend healing to happen it does. Groups of 8-12 were asked to nominate one person who needed healing to stand in the middle of the circle while the others held hands and focused on a positive healing outcome. Our person wanted to be healed from lifelong tinnitus. We focused on ‘Paul has clear hearing and is whole and well in all other ways.’

During this exercise I felt Reiki energy rushing through me. By the end, about five minutes, I was so hot I wanted to strip off (unfortunately I was only wearing one layer and exposure was not on the agenda). Paul said the tinnitus hadn’t gone, and Lynne reminded him that not all healing happens instantly. It is also possible that others in the circle experienced healing. The person to the right of me said she felt a great heat coming from me, and had noticed it also during the meditation at the beginning. I’ve been given several messages recently about re-connecting with physical healing. Maybe this is one way of getting me to do so.

Lynne’s new book The Bond looks at how we can use the knowledge of our interconnectedness to help our communities. She’s also helping groups to set up ‘healing pods’. Lynne is also editor of the new magazine What Doctors Don’t Tell You, which has been a web magazine for years and has now made it onto the shelves in the shops.

Given that I’d sat in spiritual/psychic development circles on Monday and Thursday, and worked intensively on the new book, this unexpected and additional work on Friday night left me feeling exhausted but at the same time exhilarated. It took me two hours to come down, calmed enough to sleep.

Author of novels Dare to Love and Betrayed www.pennydixon.com poetry anthology Raw www.cymbalspublishing.co.uk and blogger www.writingcreativelywithspirit.com
View all posts by predencia →
This entry was posted in Uncategorized. Bookmark the permalink.