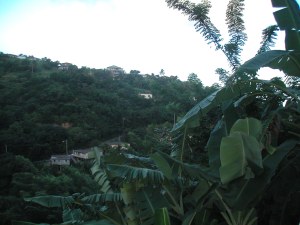 The journey from Barbados to Montserrat took me via two other islands, Dominica and Antigua. The Liat aircraft took off on time. It was a bit like boarding a bus. ‘Sit anywhere but the back seats’, the chief cabin crew said as we filed on with our varying sizes of carry on bags. I snuggled into a window seat right by the wheels of the aricraft and listened to the safety talk. ‘We have oxygen on the aricraft if necessary’, replaced the usual ‘in the case of cabin pressure dropping oxygen masks will drop down’. Watching the wheels I could tell exactly when we took off, and knew we were staying up when they folded like giant exotic umbrellas being cased.

The lushness of Dominica reminded me of Guyana, but with more contours. I wanted to stay longer than the twenty minutes it took to pick up new passengers. I know I’ll be back. The seat next to me which had been vacant was filled by a base guitarist, about fifty five, who had been to the international music festival and was on his way back to Tobago.

I’ve been to Antigua before, but the dry arid landscape that I remembered from twenty odd years ago was now covered in green. When I queried it with my friend she said the ash from Montserrat has spread far and wide across the Caribbean, bringing some unexpected benefits.

I was the only person checking in at the Fly Montserrat desk and was informed that we would be leaving early if all passengers checked in early. Having paid 28US dollars for my departure tax, the customs officer sent me back for a refund as I’d not been in the country for twenty four hours. This was a pleasant and very welcomed surprise, as the last time I was in Antigua someone relieved me of rather a lot of my travelling funds from the hotel room.

The airport is the biggest and busiest I’ve encoutered so far on this trip, and again, very friendly. The member of staff on the departure gate was a Jamaican woman from my parish of Clarendon in Jamaica. She was surprised by my surname. ‘Dixon isn’t a Claridonian name’ she declared. Then, ‘Oh I knew it had to be something like that’ when I explained it’s my married name.

We did, indeed, leave early, with a full flight of seven passengers and a pilot. One person’s bags had to be left for the following flight as the 10kgs would have been too much for the safe flying of the aircraft. No amount of cajoling could budge the pilot. I got some amazing footage of the take of and landing. I didn’t think it possible, but Montserrat is even more lush than when I was here twenty seven years ago, and is, in essence, a different island. Most of the south has been devastated by the volcano and the newly developed and developing north is emerging as a splendid alternative for what was lost. Survival is stamped all over the island.

I received a warm welcome at customs and a welcome pack from the festival organisers containing lots of goodies from the various sponsors. Unfortunately Colin Channer won’t be coming but there’ll be plenty of other great writers and readers to meet. By some strange quirk of fate I’m going to be doing a presentation to a group of teachers today on using the ABCapproach to behaviour management.

My friend here lives in the mountains. Peace, tranquility and hungry mosquitoes.

Author of novels Dare to Love and Betrayed www.pennydixon.com poetry anthology Raw www.cymbalspublishing.co.uk and blogger www.writingcreativelywithspirit.com
View all posts by predencia →
This entry was posted in Montserat 2011. Bookmark the permalink.